Unconscious bias can raise its ugly head during any part of the hiring process, but job posts are where it’s most impactful. Efforts to mitigate unconscious bias in your recruiting efforts can start right there.

So, how do recruiters and hiring managers develop awareness of not only society’s innate biases but also their own? To say it’s hard to recognize unconscious biases we don’t even know we have is an understatement. That’s why Datapeople’s bias guidance helps recruiting teams catch unconscious bias before it leaves the door in a job posting.

What is unconscious bias in hiring?

Bias takes different forms and is more pervasive than most of us think. Not only does bias live inside individuals, it also gets passed on from generation to generation on a societal level. And it’s not just the obvious negative biases of racism and misogyny. Those are just the tip of the iceberg.

There are positive biases like affinity and similarity attraction where recruiters unconsciously favor a candidate who is similar to them. There’s also the halo effect where recruiters unconsciously assign good qualities to a candidate that don’t necessarily exist. And there are negative biases such as the horn effect, which is the opposite of the halo effect.

Have you ever heard someone say they know within five minutes of an interview whether they’ll hire a candidate? This is confirmation bias, where recruiters form an early opinion of a candidate, positive or negative, that never leaves them.

Other biases have more to do with recruiters themselves. With intuition or overconfidence biases, recruiters may trust their intuition more than data or overestimate their assessment abilities.

Bias training can only go so far

While unconscious bias training is essential and can help reduce some of these biases, it can’t get them all. Humans are far too complex and bias is far too nuanced for that. As evidenced by the list above (which is only a handful of potential biases).

In fact, researchers from Harvard University, the University of Minnesota, and the University of California, Berkeley, took a look at how well various approaches to unconscious bias work. They analyzed three main strategies that employers take to promote diversity:

Some programs are designed to establish organizational responsibility for diversity, others to moderate managerial bias through training and feedback, and still others to reduce the social isolation of women and minority workers.

Here’s what they concluded:

Efforts to moderate managerial bias through diversity training and diversity evaluations are least effective at increasing the share of white women, Black women, and Black men in management. [Meanwhile,] efforts to attack social isolation through mentoring and networking show modest effects. [And] efforts to establish responsibility for diversity lead to the broadest increases in managerial diversity…

[However, even] the programs that work best have modest effects, particularly for African Americans, who are poorly represented to begin with. Diversity committees raise the proportion of Black women in management by a remarkable 30 percent on average, but from a baseline of only 1.4 percent. Appointing a full-time diversity staffer raises the proportion of Black men by a healthy 14 percent, but from a baseline of only 2.1 percent.

In other words, we’re asking a lot of our recruiting teams. They have to weed out not only societal bias but unconscious bias within themselves as well.

Job posts are the most high-profile element of the recruiting process. For the sake of both the quality and diversity of your candidate pool, job posts have to attract all qualified candidates. There can’t be anything in your job post that could turn away qualified job seekers.

That’s a tall order when you take unconscious bias into account. In fact, it’s not realistic to expect a hiring manager or recruiter to fully understand everyone from completely different backgrounds with totally different life experiences. They need some help.

Datapeople shoulders some of the burden by identifying potential problems in job posts. The platform analyzes them for racism, tokenism, ableism, ageism, sexism, nationalism, elitism, and religious bias. It then provides alternatives (unless there’s really no way to rephrase an exclusionary sentiment). So every one of your jobs goes live without unconscious bias inadvertently making its way into your job post.

If you’d like to see for yourself how Datapeople mitigates unconscious bias in job posts, we invite you to sign up for a free trial. If you’d rather talk with someone about how Datapeople can make all parts of your hiring process more fair, feel free to schedule a demo. 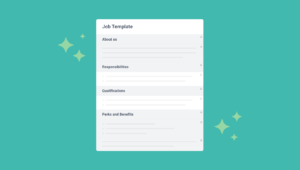 Is ‘Years of Experience’ in a Job Post Ageism?